ABOUT ENERGY LITERACY… “Error 404 – Not Found Sorry, but you are looking for something that isn’t here.”

But it seems there has been a terrible misunderstanding… during the LTEP consultations when everyone was saying there was a desperate need for energy literacy, they meant that he and his colleagues that have made a dog’s breakfast of Ontario’s grid because they don’t seem to possess even a rudimentary knowledge of the Laws of Thermodynamics which left them gullible to the “green” energy sales pitch.

Those laws are not like the Endangered Species Act or other environmental protections the OnGov has “modernized” into a shoot-for-the-loophole bonus for select industries. Thermodynamics is more like a game you can’t get out of, you can’t break even, and you certainly can’t wynne, so stop running.

Under the circumstances, the Government’s desire to educate the public is actually quite offensive.
Too many ratepayers have experienced that their bills just keep going up, sometimes regardless of measures as extreme as never using their oven and setting their thermostat so low they have to wear several layers of winter clothing. Public health and safety may be endangered, because some who are facing fuel poverty will be desperate enough to continue to follow the OnGov’s energy conservation advice.

Basic math is another area where Ministry skill levels are, apparently, below par, even by Ontario standards. Additional conservation will not yield greater savings to ratepayers where fixed costs already exceed income and more expensive contracts for unneeded and unreliable generation are to be added.

Many who attended those LTEP consultations had their worst fears confirmed in conversations with Ontario Power Authority experts. One conservation guru admitted that any putative savings would be a case of robbing Peter to pay Paul. P.Taxpayer may even be mugged by P.Ratepayer…

The Energy Ministry accounting system erroneously treats these as “savings”: loss of customer base, cancellation of contracted nuclear generation and the difference between deferred delivery payments to “unreliable” generation and dumping of high cost electricity at fire sale, or negative, prices.

As a business model this fails all “best practices” tests and we are faced with one inevitable conclusion as this otherwise incomprehensible pattern of behaviour is repeated, that the predictable outcome of decreased prosperity for the masses and increased riches for the ruling class must be the true agenda.

Despite a growing suspicion of Government the LTEP online survey had a respectable response rate of 8000 and among the significant statics we see that the majority preferred nuclear as our best option, while the ‘green’ energy option scored last. 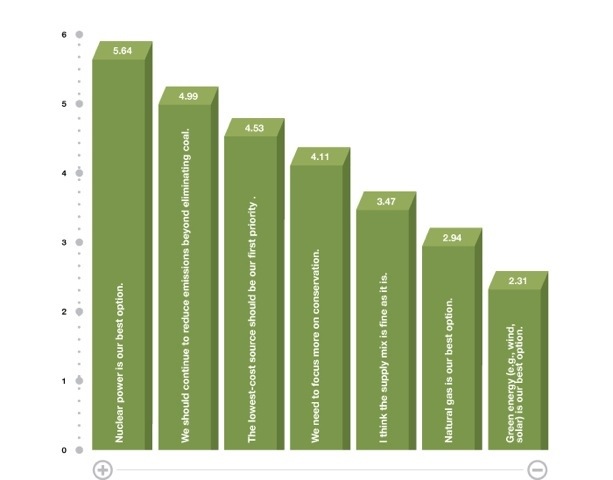 Nonetheless it was just announced that 10,700 megawatts of wind, solar and bioenergy will be online by 2021. Ontario has extended the renewable phase-in by three years compared to the 2010 LTEP projection, but the new LTEP expects renewables (water, wind, solar, and biogas) totalling 46% to contribute more in the future than nuclear at 42%!

The Ontario government appears ineducable making the cost of “public consultation” another paying-for-nothing indignity we are forced to bear.

6 Responses to ABOUT ENERGY LITERACY… “Error 404 – Not Found”